Along with the illusory stability of rising GDP, the extremes of debt, indebtedness, stimulus and speculative frenzy required to prevent the implosion of the “phantom asset bubble” all rise parabolically.

Imagine being at a party celebrating the tremendous wealth generated in stocks, cryptocurrencies, real estate, and almost every other asset class over the past decade. The lights flicker briefly, but the host assures the crowd that the generator powering the party is working perfectly.

As a skeptic, slip into the excuse of bringing more champagne and visit the generator room. To your horror, you find the entire assembly taped and rotten 2X4s together, the electrical panel is a pungent smelling mess of haphazardly frayed wires, and the generator is overheated and vibrating from its foundation bolts. Whatever governor the engine once had is gone, it clearly won’t last the night.

The party is the US economy, and the generator room is the Federal Reserve, its proxies, and the US Treasury Department, everyone run to failure. What we are experiencing in real time is the illusion of stability and the inevitability of collapse. I’ve prepared a couple of diagrams to graphically illuminate this reality.

Here is the illusion of stability in a nutshell: While gross domestic product (GDP), the most comprehensive measure of the economy, has continued to grow (in both nominal and real / adjusted terms), the stimulus measures from the US Federal Reserve and national debt are required to continue to push GDP in the same direction has exploded higher and pursues a parabolic blow-off.

Let’s start with a chart of GDP that I’ve broken down into four epochs. Era # 1 was the period of widespread prosperity, defined as productivity gains that increased wages faster than inflation, that is, the purchasing power of wages so that more goods and services were purchased with every hour worked. Note that GDP did not skyrocket during this period, since the productivity and prosperity gains were real and not based on financial tricks, debt, indebtedness, or Fed incentives. This era lasted from the 1950s to the mid 1970s when stagflation ended the era of rising labor / wage purchasing power.

Era # 2 started around 1981 and lasted until 1999: that was the time of Financialization, when debt and leverage replaced productivity as a source of profit and, as a result, speculation, leveraged buyouts, and other financial gimmicks proved far more profitable than the actual production of goods and services. A key element of Financialization is globalizationbecause the big profits only flow when debt, risk, income streams and phantom financial instruments commercially available (ie manufactured, packaged and sold as a commodity) and sold worldwide.

Here is the nominal GDP: it looks great until we look below the surface.

Here is real GDP, adjusted for official inflation (in chained 2012 dollars). Looks very similar to nominal GDP: If we look at the steady rise in real GDP, we would imagine the nation’s wealth is even broader and more solid than it was in Era # 1, but we are wrong: Era # 2, # 3 and # 4 are characterized by increasing inequality, the death spiral of the purchasing power of the middle class and total dependence on exploding economic stimuli, debt, indebtedness and speculation. 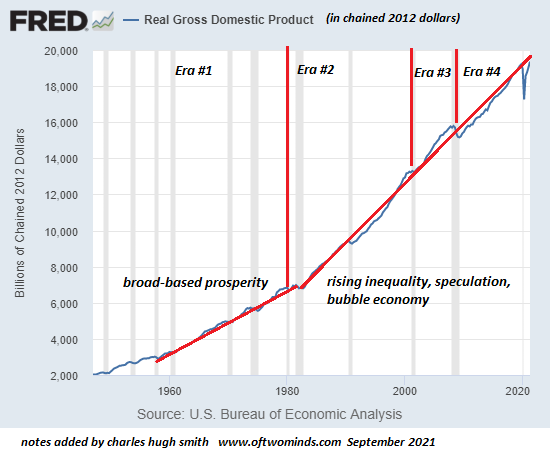 You see the trend: GDP increased seven times while government debt increased 30 times – mostly in the last 13 years of Era # 4. 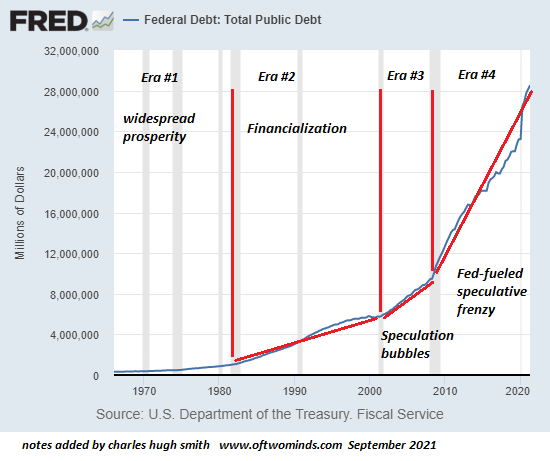 This chart of government debt as a percentage of GDP is revealing: As of Era # 1 (Widespread Wealth), the percentage decreased as GDP grew faster than federal debt. In Era # 2 (financialization), debt rose much faster than GDP, but the dot-com boom reduced the percentage to around 60%, twice as much as in Era # 1.

Era # 3, the bubble economy, stayed in the same range, but the trend changed in Era # 4, after the Fed’s # 2 bubble burst and almost the entire global financial system collapsed. In the era of speculative Fed frenzy (era # 4), debt quickly rose to 100% of GDP and then made another quantum leap above 120% – a level of kleptocracy in developing countries.

As wealth replaced with inequality and Fed-inflated bubbles, debt as a percentage of GDP quadrupled. 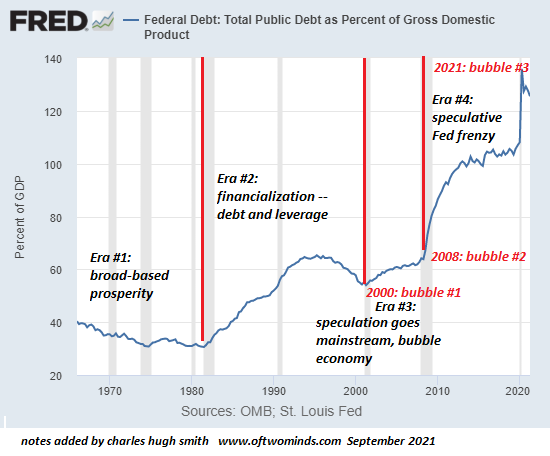 Speaking of parabolic blow-offs, here’s the Federal Reserve’s balance sheet, which has increased tenfold in just 13 years. Remarkably, isn’t it, that the U.S. economy has expanded decades of expansion with a Fed balance sheet well under $ 1 trillion, decade after decade, but now the economy needs the Fed to create $ 7.5 trillion and throw them into the bonfire of speculative bubbles to keep the economy from imploding. 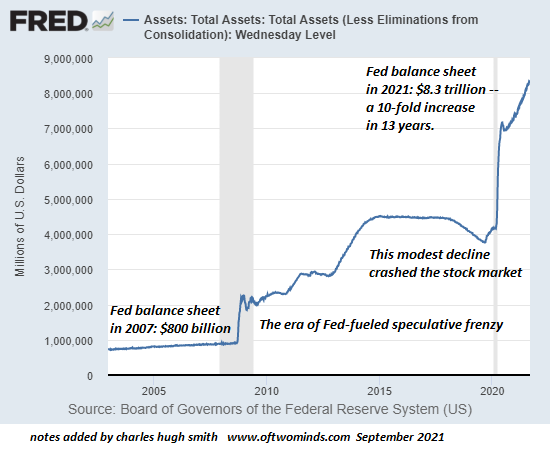 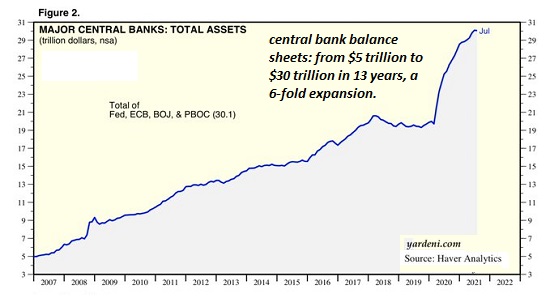 We all know what happens when the expansion of debt, indebtedness, speculation and central bank stimuli stall in the slightest: the whole Global phantom asset bubble bursts: This is visible in the graph of total debt, public and private: 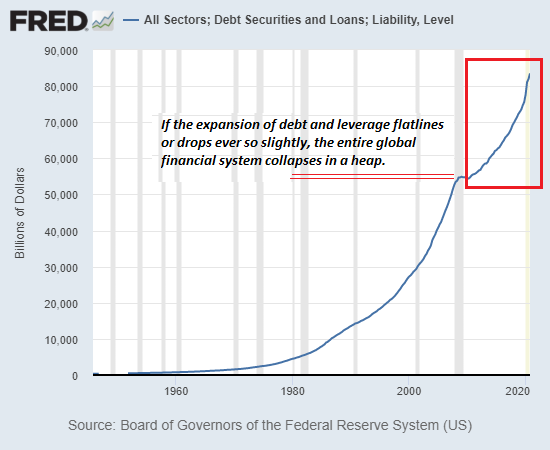 In addition to the illusory stability of rising GDP, the extremes of indebtedness, indebtedness, stimulus and speculative frenzy that are required to maintain the Phantom asset bubble from imploding all rise parabolically. Any attempt to return to an economy that is not dependent on debt bubbles and unsustainable debt expansion and monetary stimulus has sparked a global market crash that can only be saved by doubling, tripling or quadrupling the existing debt and incentives.

Therefore the collapse is inevitable now. Parabolic blow-off expansions create instabilities that cannot be suppressed by doing more of what isn’t working; This is called .. run to failure for one reason: the only possible outcome is systemic failure, ie the collapse of the phantom asset bubble, a collapse that will bring down the entire bubble-blowing machinery.

Before popping the bottle of champagne, you’d better take a look at the generator room first. Tape, frayed cables, the smell of overheated metal, and rotten 2X4s won’t keep the party lights going for long.